The president of Somalia leads a weekly cabinet meeting. 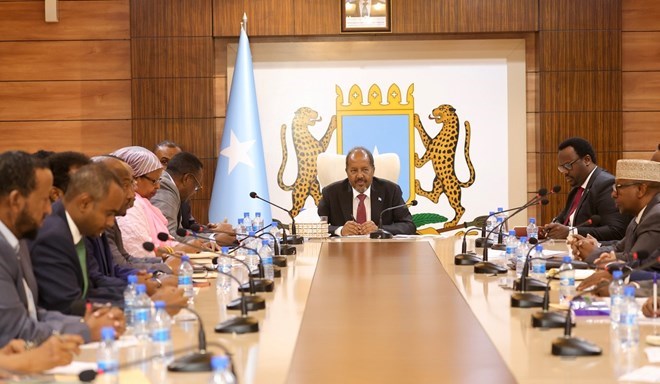 – On Thursday, the weekly Council of Ministers meeting was presided over by Prime Minister Hamsa Abdi Barre and Somali President Hassan Sheikh Mahmoud.

The emergency plan for drought relief, development, and stabilization of al-Shabaab-liberated areas was presented at the meeting.

According to President Hassan Sheikh Mohamud, the situation for citizens in places under the control of al-Shabab is severe, and the government would send relief to newly freed villages held by militants.

The Council of Ministers was urged by President Hassan Sheikh Mohamud to give the war against Al-Shabaab, a challenge to the Somali government, top priority.

He thanked the Somali people for their support of Somalia’s armed forces and vowed that his administration will liberate any territories under the control of the terrorist organization al-Shabab.

The offensive is mostly still going on in the Hiiraan region, where militia groups affiliated with the local administration have helped government forces regain more than 20 villages from terrorists.