The President of Somalia meets with foreign ambassadors and diplomats. 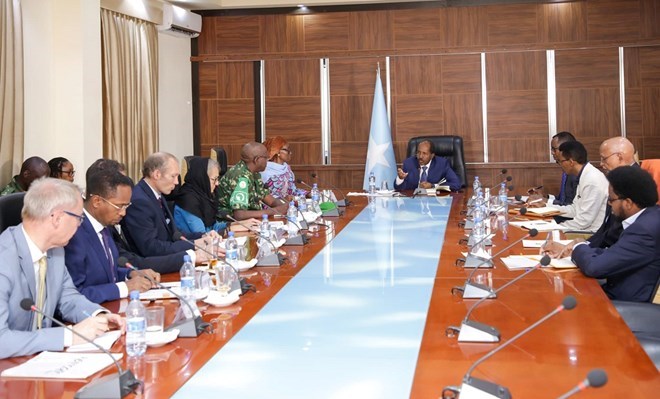 MOGADISHU (SOMALI MAGAZINE) On Wednesday, Somali President Hassan Sheikh Mohamud met with foreign ambassadors and diplomats at Villa Somalia in Mogadishu to discuss issues such as the ongoing drought response and the role of international partners in assisting the suffering Somali people.

The President informed the delegation on the country’s humanitarian condition as a result of the drought. He mentioned the government’s efforts and mobilization to deal with the matter during the meeting.

They praised the President’s efforts to bring people together and alleviate the drought. They also praised the recent National Consultative Council meeting in Mogadishu, which was attended by the country’s five regional state presidents, the Prime Minister, and the mayor of Mogadishu, and emphasized the importance of the conference’s communiqué for the state’s development and building.

Representatives from the international community promised to increase support for Somalia’s government, particularly in the areas of security, humanitarian difficulties, reconciliation, and institutional development.