The Somali Prime Minister honors KSrelief with a Medal of Honor for its humanitarian work in Somalia. 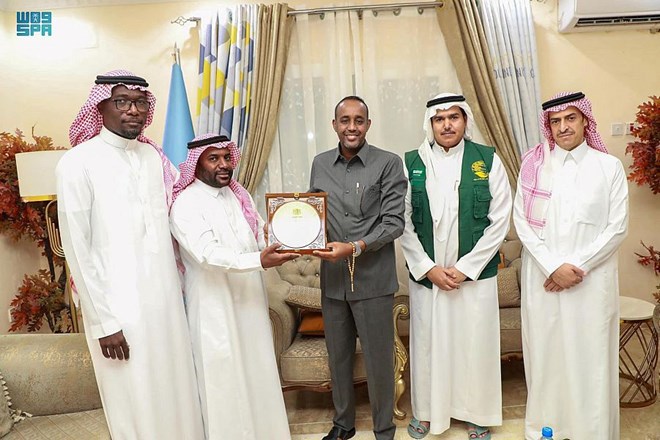 The Medal of Honor was presented to the King Salman Humanitarian Aid and Relief Center (KSrelief) by Somali Prime Minister Mohamed Hussein Robley for its outstanding efforts in providing urgent humanitarian and relief assistance to displaced people in Somalia who were affected by drought, including securing and distributing 2,838 tons of food baskets to 254,184 Somali people. Youssef Al-Rahma, the director of KSrelief’s African branch, got the honor.

This came during the Somali Prime Minister’s meeting with the Saudi Ambassador today, which was also attended by Youssef Al-Rahma, the director of KSrelief’s Africa branch, where the two sides discussed issues of mutual interest related to humanitarian and relief affairs, as well as ways to improve them.

Ambassador Al-Mawlid expressed his heartfelt gratitude to the Somali Prime Minister and the Somali government for honoring the Kingdom of Saudi Arabia, as represented by KSrelief, and reaffirmed the Kingdom’s unwavering support for Somalia in a variety of areas.