The space race is back on – but who will win? 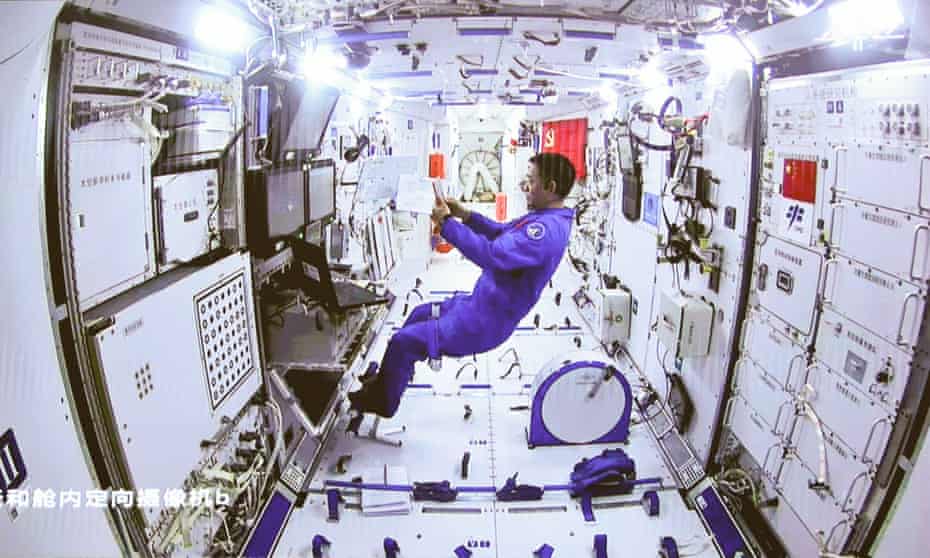 Liu Boming took in the dizzy view. Around him lay the inky vastness of space. Below was the Earth. “Wow,” he said, laughing. “It’s too beautiful out here.” Over the next seven hours, Liu and his colleague Tang Hongbo carried out China’s second spacewalk, helped along by a giant robotic arm.

Mission accomplished, the two taikonauts – China’s astronauts – clambered back into their home for the next three months: Beijing’s new space station. The core module of the station, named Tiangong, meaning “heavenly palace”, was launched in April. “There will be more spacewalks. The station will keep growing,” Liu said.

Meanwhile, on Mars, a Chinese rover was exploring. Video shows the vehicle trundling over a rocky surface. There is even sound: an eerie mechanical groaning. Since landing in May the Zhurong probe has been busy seeking clues as to whether Mars once supported life. There is no answer yet: so far it has travelled just over 410 metres.

China is only the second country to land and operate a rover on the red planet, after the US. The frantic tempo of the China National Space Administration’s (CNSA) recent programme is reminiscent of the cold war, when Moscow and Washington were superpower rivals scrambling to put the first man in space and land on the moon.

Half a century on, space has opened up. It is less ideological and a lot more crowded. About 72 countries have space programmes, including India, Brazil, Japan, Canada, South Korea and the UAE. The European Space Agency is active too, while the UK boasts the most private space startups after the US.

Space today is also highly commercial. On Sunday Richard Branson flew to the edge of space and back again in his Virgin Galactic passenger rocket. On Tuesday, Branson’s fellow billionaire Jeff Bezos is due to travel in his own reusable craft, New Shepard, built by the Amazon founder’s company Blue Origin and launched from west Texas.

Non-state actors play an increasingly important role in space exploration. Elon Musk’s SpaceX vehicles have made numerous flights to the International Space Station (ISS), and since last year they have transported people as well as cargo. Later this year Musk is due to send his own all-civilian crew into orbit – though he isn’t going himself.

Even so, space still reflects tensions on Earth. “Astropolitics follows terra politics,” says Mark Hilborne, a lecturer in defence studies at King’s College London. Up there anything goes, he adds. “Space governance is a bit fuzzy. Laws are few and very old. They are not written for asteroid mining or for a time when companies dominate.”

The biggest challenge to US space supremacy comes not from Russia – heir to the Soviet Union’s pioneering space programme, which launched the Sputnik satellite and got the first human into space in the form of Yuri Gagarin – but from China.

In 2011 Congress prohibited US scientists from cooperating with Beijing. Its fear: scientific espionage. Taikonauts are banned from visiting the ISS, which has hosted astronauts from 19 countries over the past 20 years. The station’s future beyond 2028 is uncertain. Its operations may yet be extended in the face of increasing Chinese competition.

In its annual threat assessment this April, the office of the US Director of National Intelligence (DNI) described China as a “near-peer competitor” pushing for global power. It warns: “Beijing is working to match or exceed US capabilities in space to gain the military, economic, and prestige benefits that Washington has accrued from space leadership.”

The Biden administration suspects Chinese satellites are being used for non-civilian purposes. The People’s Liberation Army integrates reconnaissance and navigation data in military command and control systems, the DNI says. “Satellites are inherently dual-use. It’s not like the difference between an F15 fighter jet and a 737 passenger plane,” Hilborne says.

Once China completes the Tiangong space station next year, it is likely to invite foreign astronauts to take part in missions. One goal: to build new soft-power alliances. Beijing says interest from other countries is enormous. The low Earth orbit station is part of an ambitious development strategy in the heavens rather than on land – a sort of belt and rocket initiative.

According to Alanna Krolikowski, an assistant professor at the Missouri University of Science and Technology, a “bifurcation” of space exploration is underway. In one emerging camp are states led by China and Russia, many of them authoritarian; in the other are democracies and “like-minded” countries aligned with the US.

Russia has traditionally worked closely with the Americans, even when terrestrial relations were bad. Now it is moving closer to Beijing. In March, China and Russia announced plans to co-build an international lunar research station. The agreement comes at a time when Vladimir Putin’s government has been increasingly isolated and subject to western sanctions. In June, Putin and his Chinese counterpart Xi Jinping renewed a friendship treaty. Moscow is cosying up to Beijing out of necessity, at a time of rising US-China bipolarity.

These rival geopolitical factions are fighting over a familiar mountainous surface: the moon. In 2019 a Chinese rover landed on its far side – a first. China is now planning a mission to the moon’s south pole, to establish a robotic research station and an eventual lunar base, which would be intermittently crewed.

Nasa, meanwhile, has said it intends to put a woman and a person of colour on the moon by 2024. SpaceX has been hired to develop a lander. The return to the moon – after the last astronaut, commander Eugene Cernan, said goodbye in December 1972 – would be a staging post for the ultimate “giant leap”, Nasa says: sending astronauts to Mars.

Krolikowski is sceptical that China will quickly overtake the US to become the world’s leading spacefaring country. “A lot of what China is doing is a reprisal of what the cold war space programmes did in the 1960s and 1970s,” she said. Beijing’s recent feats of exploration have as much to do with national pride as scientific discovery, she says.

But there is no doubting Beijing’s desire to catch up, she adds. “The Chinese government has established or has plans for, programmes or missions in every major area, whether it’s Mars missions, building mega-constellations of telecommunications satellites, or exploring asteroids. There is no single area of space activity they are not involved in.”

“We see a tightening of the Russia-China relationship,” Krolikowski says. “In the 1950s the Soviet Union provided a wide range of technical assistance to Beijing. Since the 1990s, however, the Russian space establishment has experienced long stretches of underfunding and stagnation. China now presents it with new opportunities.”

Russia is poised to benefit from cost-sharing, while China gets deep-rooted Russian technical expertise. At least, that’s the theory. “I’m sceptical this joint space project will materialise anytime soon,” says Alexander​ Gabuev, a senior fellow at the Carnegie Moscow Centre. Gabuev says both countries are “techno-nationalist”. Previous agreements to develop helicopters and wide-bodied aircraft saw nothing actually made, he says.

The film, Challenge, is about a female surgeon operating on a cosmonaut in space and has been backed and financed by Roscosmos. It stars Yulia Peresild, who is due to head to space in October with director Klim Shipenko. The launch seems timed to beat Tom Cruise, who is due to shoot his own movie onboard the ISS with director Doug Liman.

Krikalev, who spent more than 800 days in space and was in orbit when the USSR collapsed, apparently told Roscomos’s chief, Dmitry Rogozin, that the film was pointless. Rogozin – its co-producer – has called on the west to drop sanctions in return for Russia’s cooperation on space projects. Putin, Rogozin’s boss, appears to not be very interested in other planets, though and is more concerned with nature and the climate crisis these days.

“Space is one of the areas that has traditionally transcended politics. The Mir space station worked at a time of east-west tensions. There was symbolic cooperation. Whether this will continue in the future is really up for debate,” Hilborne says. “The US is very sensitive about what happens in space.”

Most observers think the US will remain the world’s pre-eminent space power, thanks to its innovative and flourishing private sector. China’s Soviet-style state programme appears less nimble. Despite ambitious timetables and billions spent by Beijing, it is unclear when – or even if – an astronaut will return to the moon. The 2030s, perhaps? Will they be American or Chinese? Or from a third country?

It may well be that the first person to boldly go again doesn’t merely represent a nation or carry a flag. More likely, they will emerge from a lunar lander wearing a spacesuit with a SpaceX logo on the back – a giant leap not only for mankind but for galactic marketing.