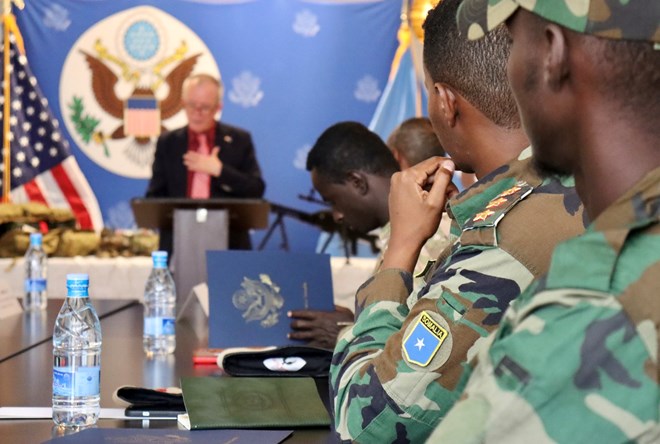 In addition to heavy armaments, the United States has given construction equipment and bomb disposal tools.

According to the Somali military, the majority of the supplies have already been delivered to the front lines of the anti-Shabaab offensive in Hirshabelle and Galmudug.

“We applaud Somali security forces’ historic effort to liberate Somali communities oppressed by al-Shabaab,” stated Ambassador André. “This is a campaign led and fought by Somalis. The United States reiterates its commitment to assisting you.”

“Allow me to offer the appreciation of the Federal Government of Somalia to the Government of the United States of America for the sustained support to Somalia’s rebuilding process and the battle against terrorism,” said Minister of Defense Abdulkadir Mohamed Nur Jama. This assistance comes at an important time for our soldiers as we strengthen their ability to confront al-Shabaab.”

The weaponry, which include light and heavy machine guns, will be used to bolster SNA-Danab units now engaged in operations in Hirshabelle and Galmudug.

The weapons have been marked and registered in accordance with the Federal Government of Somalia’s Weapons and Ammunition Management policy, and they will considerably boost the lethality and mobility of SNA-Danab forces engaging in these operations.