The WHO Regional Director for the Eastern Mediterranean officially launches the WHO drought response plan in Somalia. 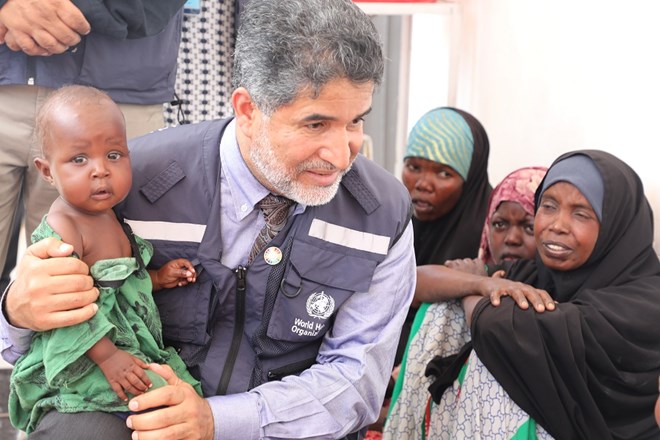 Following that, he attended an event in Mogadishu where the WHO emergency health response plan for drought was officially announced, where HE Dr Fawziya Abikar Nur, the Minister of Health and Human Services, was also present.

The ongoing drought in Somalia and across the Horn of Africa is known to be the region’s worst one in the last 4 decades. In Somalia alone, an estimated 6.1 million people have been affected by the drought, of whom 759 400 have been displaced in search of water, food and pasture; 3.5 million lack sufficient access to water; 6 million continue to face severe food shortages, with approximately 1.4 million children facing acute malnutrition through 2022, including 329 500 likely to become severely malnourished; So far, a total of 3675 suspected cases of cholera and 2720 cases of measles have been confirmed since January 2022 from the drought-affected areas.
“Whenever natural disasters strike, diseases inevitably follow, particularly in fragile contexts. At all levels, WHO is leaving no stone unturned to support the people of Somalia to cope with the austere effects of drought,” said Dr Al-Mandhari. “As one of the first responders on the ground, WHO is working with the government, donors, and other UN agencies and health cluster partners to reduce the spread of diseases and complications related to malnutrition, while simultaneously rebuilding health systems to cope with similar calamities in the future.”

The WHO’s emergency health response plan for drought in Somalia for 2022, urgently requires US $35 million over the next 10 months to deliver emergency life-saving operations to reach over 2.5 million vulnerable people in the worst-affected parts of the country.

Dr Al-Mandhari explained that the drought response plan, which will serve as WHO’s blueprint for intensifying efforts to save more lives and cushion Somalis from severe forms of disease and malnutrition, was based on lessons learnt from past droughts in Somalia and would help to prevent epidemics, save lives, protect communities’ health and nutrition needs, and avert an additional health crisis. He also praised the Federal Government and UN partners for their collaborative efforts, emphasizing that the true essence of the Eastern Mediterranean Region’s Vision 2023 of “health for all by all” was in solidarity with the ongoing drought response work.

“WHO is responding to Somali families’ most dire needs, and is working to ensure every Somali household, including the most vulnerable, can access emergency life-saving support especially during emergencies. The WHO Emergency Health Response Plan for drought in Somalia calls for early action on a no-regret basis. It is imperative that WHO has access to flexible, smart and unearmarked funds to scale up our life-saving operations in the hard-to-reach areas to protect health and well-being of the people impacted by the drought” said Dr Mamunur Malik, WHO Representative to Somalia.