Thousands of Somalis are in risk of starvation, according to relief organizations.

The drought devastating the Horn of Africa has hit Somalia the hardest, with an estimated one-half of its 16 million people facing crisis-level food insecurity. Aid groups say hundreds of thousands of Somalis are at risk of starving to death, while hundreds of children are already dying of malnutrition.

At a center for malnourished children in Mogadishu, Fadumo Madeey, 38, holds her 4-year-old child, who is suffering from severe malnutrition because of the hunger crisis.

Madeey fled hunger in Buulo Gaduud village in Somalia’s southern Bay region on June 11, after three of her children died from malnutrition. She now lives in the Al-Hidaaya camp for internally displaced people with her three remaining children.

Madeey said that before the drought, they had livestock and farms that grew crops, but the drought destroyed them all at once.

The U.N. says about 800,000 Somalis have been displaced by the record drought.

Asho Adan, 32, arrived in Mogadishu a week ago from Saakow town, in the Middle Jubba region. She’s at the center to get emergency food aid for her withered children.

Adan said the drought destroyed all their crops, killed all their animals and left all seven of her kids malnourished.

While many rural families fleeing drought see Mogadishu as their only hope, the Somali capital’s hospitals are overwhelmed. 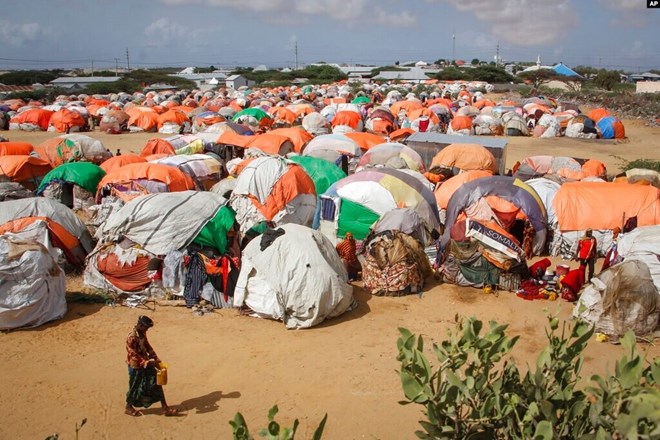 FILE – Somalis who fled drought-stricken areas walk next to a cluster of makeshift shelters at a camp for the displaced on the outskirts of Mogadishu, Somalia, June 4, 2022.

The supervisor of Martino hospital’s malnutrition ward, Dr. Abdirizaq Yusuf, said there is a shortage of high-nutrient food to treat the suffering. He said malnourished children must be given a therapeutic diet, such as high-nutrition milk, but the supplies donated by the United Nations are already depleted.

Meanwhile, at Al-Hidaaya IDP camp just outside Mogadishu, mothers and young children wait outside their makeshift shelters for help. Camp caretaker Nadifa Hussein said hundreds of people in need are arriving every week.

Aid groups say the Somali government lacks the capacity to deal with what has become the worst drought to hit the Horn of Africa in decades. And without more food soon, the U.N. says, more than 7 million Somalis will be in crisis and 1.5 million children will face acute hunger this year.