Three people have been held for 14 days on suspicion of plotting a terrorist attack. 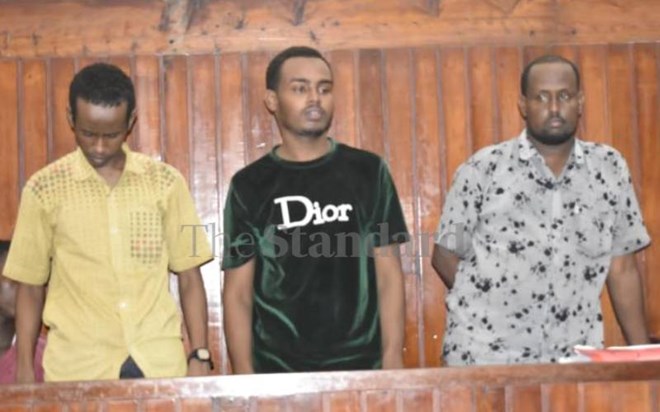 A Mombasa court has arrested three foreigners for 14 days pending investigations into allegations that they planned to carry out a terror act after the Easter break.

Following an application by the police, Senior Principal Magistrate Vincent Adet allowed the Anti-Terror Police Unit to arrest Osman Mohamed Hassan, Mohamed Ibrahim Hassan, and Hussein Ibrahim Hassan (all from Somalia) so that the police could continue their investigations into the claims.
“I will grant the application as requested, and the respondents will be held for a period of 14 days,” Adet stated.

According to an affidavit submitted by the police, the accused have ties to known terror operations in Somalia.“Intelligence reports have revealed that there is an imminent threat of attacks which was planned by seven Al-Shabaab operatives dispatched from Somalia within the Coastal region after the Easter holiday,” said state prosecutor Hillary Isiaho.

Isiaho told the court that the respondents were in constant communication with the said terror operatives and that investigators will require more time to probe the matter, especially because the suspects are foreigners.

He said they believe Mohamed Ibrahim Hassan is a Somali national who sneaked into the country for unknown missions and allegedly tried to acquire Kenyan registration.

He said the investigating team requires to visit Dadaab and IFO refugee camps in Garissa County where Mohamed Ibrahim Hassan is believed to have met with other known terror operatives.

“On April 18, 2022, Hussein Ibrahim Hassan was found smuggling a cell phone into Makupa Police cell and the investigating team wishes to establish the source of the cell phone,” said Isiaho.

He said there is a parallel investigation going on in Nairobi in relation to the arrest of the three.

The prosecutor told the court that the suspects may hinder investigations if freed.

The prosecution said the police are following up on intelligence reports to make more arrests claiming there are other suspects within and outside Mombasa County.

Isiaho said the police are investigating the trio for being members of a terrorist group and being in possession of materials connected to the commission of terrorism.

However, Osman opposed the application noting the police had detained the suspects for six days since April 13 when they were arrested at night.

“I want the court to reduce the 14 days to seven. The police have already taken six days investigating the matter,” said Osman.

The three were arrested on April 13 at Muzamil Shop One at Barsheba in Kisauni sub-county.