Turkey to send grain to Africa if Russian exports unblocked 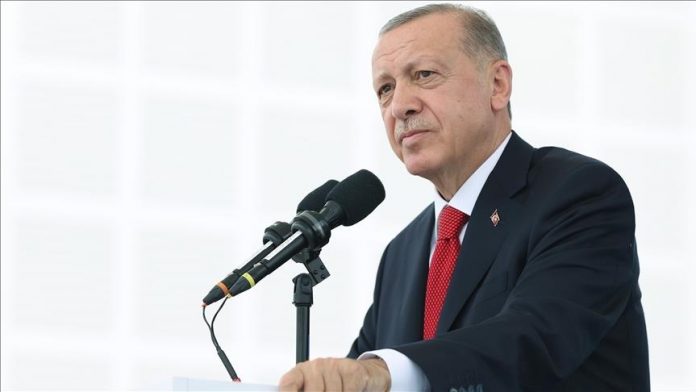 If Russian exports through the Black Sea are permitted, Turkey will send grain and other pertinent products to needy African nations, according to the Turkish president on Friday.

President Recep Tayyip Erdogan expressed the same opinion as his Russian counterpart Vladimir Putin to reporters on the plane after his three-day trip to the Balkans, claiming that Ukrainian grain is exported to developed nations rather than to those in need.

On July 22, an agreement was signed in Istanbul by Turkey, the UN, Russia, and Ukraine to resume grain exports from three Ukrainian Black Sea ports that had been suspended since the start of the Russia-Ukraine war in February. To manage the shipments, a joint coordination centre in Istanbul was established with representatives from the three nations and the UN.

Although not included in the agreement, it was negotiated that sanctions against Russian exports would be lifted as soon as Russia permitted the passage of ships through Ukrainian ports.

On the sidelines of the annual leaders’ summit of the Shanghai Cooperation Organization, which will be held in Samarkand, Uzbekistan, on September 15–16, Erdogan said he anticipates meeting with Putin in “broad and in-depth” terms.

I find Putin’s comments that “grain is going to the rich countries, not the poor” to be true, but this shouldn’t be the case, he said, adding that the main topic of the meeting would be the grain corridor issue.

The Turkish president went on to say that the grain corridor’s “actual” purpose should have been to assist underdeveloped nations, but “that doesn’t appear to be the case at the moment.”

Turkey will ask Putin to send Russian goods on ships passing through the corridor in Samarkand. We’ll ask him specifically to start this, Erdogan said.

Putin asserted earlier on Wednesday that “almost all” of the grain leaving Ukraine’s Black Sea ports is “sent to the EU countries, not to the developing poorest countries.”

Putin stated, “Under the UN World Food Program, which denotes assistance to countries in need, only two ships were loaded, I emphasise only two out of 87, and 60,000 tonnes of food were exported on them of the 2 million tonnes, this is only 3% that is sent to developing countries.

Over 2.5 million tonnes of agricultural goods from Ukraine have been transported by at least 100 ships since the first one sailed in accordance with the agreement on August 1.

The energy crisis in Europe

Erdogan added that he had spoken with Putin about natural gas prices and that he hopes to secure a favourable outcome for the welfare of the Turkish people.

Regarding the energy crisis in Europe, Erdogan claimed that the Russian leader had not made “an arbitrary” choice regarding gas exports to the continent.

He claimed that nations like Germany have started utilising the Ruhr basin, a significant thermal power plant.

Thankfully, we do not have such a problem for the time being because Russia does not impose any sanctions on us, he said. “Europe is not as comfortable and peaceful as one might think. It is going somewhere very different.

For Europe, this winter won’t be easy, according to Erdogan.

The latest attitude of Greece toward Turkey is inexplicable, Erdogan said in response to a question about his recent comments “we may come suddenly one night” on Greece.

Erdogan said he will also discuss the issue with US President Joe Biden during his visit to New York for the UN General Assembly meeting on September 21–23, highlighting the fact that Greece is still militarising “the islands right under our noses despite agreements on the non-military status agreements.”

Turkey, a member of NATO for over 70 years, has expressed dissatisfaction with Greece’s recent provocative actions and rhetoric in the area, claiming that such actions frustrate its sincere attempts to achieve peace.

After Greece complained to NATO Secretary-General Jens Stoltenberg to have a tweet commemorating Türkiye’s 100th Victory Day, which marks the resounding Turkish victory over Greek occupier armies in the 1922 Battle of Dumlupinar, removed, tensions between the two neighbours grew.

To commemorate the 100th Victory Day, LANDCOM tweeted a post on Tuesday. But on Thursday, it tweeted a brand-new message to Ankara, saying: “We are grateful to have Türkiye as our host nation.”

NATO was criticised by Turkey for removing the tweet, calling it “unacceptable” and asserting that by doing so in response to Greece’s “baseless request,” the alliance “has greatly discredited its corporate identity and prestige.”