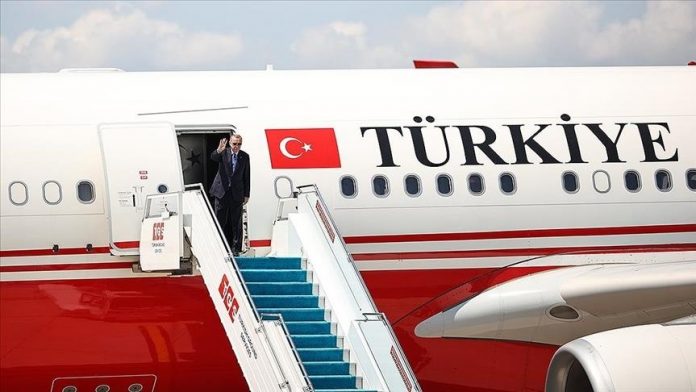 On Thursday, Turkish President Recep Tayyip Erdogan travelled to Lviv, Ukraine, where he will meet with his counterpart there as well as the head of the UN.

Erdogan and President Volodymyr Zelenskyy will meet privately at the Potocki Palace to discuss all facets of Turkish-Ukrainian relations at the level of a strategic partnership.

A trilateral summit with UN Secretary-General Antonio Guterres will take place after the bilateral discussions.

By stepping up the activities of the mechanism formed for the export of Ukrainian grain to the global markets, Erdogan, Zelenskyy, and Guterres will discuss ways to end the Ukraine-Russian conflict diplomatically, according to the Turkish president.

After the trilateral meeting, they are anticipated to conduct a joint press conference.

On July 22, a deal was made in Istanbul by Turkey, the UN, Russia, and Ukraine to reopen three Ukrainian Black Sea ports so that Ukrainian grain that had become stranded due to the now six-month-old Russia-Ukraine war could be exported.

The Joint Coordination Center (JCC), which consists of representatives from the three nations and the UN, was formally established on July 27 in Istanbul to oversee the procedure and allow for the secure transport of commercial supplies and fertilisers by merchant ships.

Following the trilateral meeting, Guterres is also expected to travel to the Ukrainian port city of Odesa to see the movement of grain, according to the UN.

On Saturday, Guterres will go to Turkey and stop by the JCC in Istanbul.