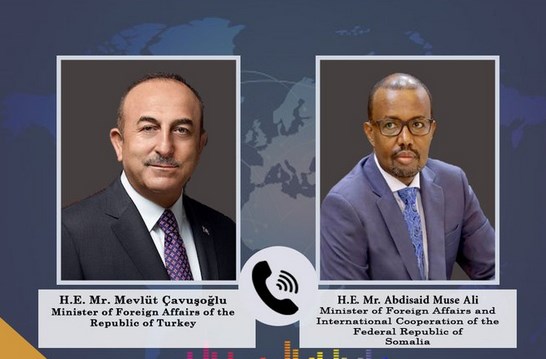 Turkish and Somali foreign ministers spoke via telephone Friday about several issues, according to diplomatic sources.

Top Turkish diplomat Mevlut Cavusoglu conveyed his condolences to his Somali counterpart Abdisaid Muse Ali for those killed earlier this week in terror attacks in the East African country.

The top Somali diplomat also confirmed he will attend the Antalya Diplomacy Forum in Turkiye’s resort city of Antalya from March 11 – 13.

Cavusoglu and Muse Ali discussed irregular migration and pushbacks and Cavusoglu conveyed his condolences for five irregular migrants that were found frozen to death on the Turkish-Greek border.

Cavusoglu said such pushbacks are unacceptable and the EU remains silent on the issue. He reiterated that Turkiye will put the human rights violation on the agenda in international platforms.

Muse Ali also expressed his gratitude for the assistance provided by Turkiye to his citizens who survived the tragedy.