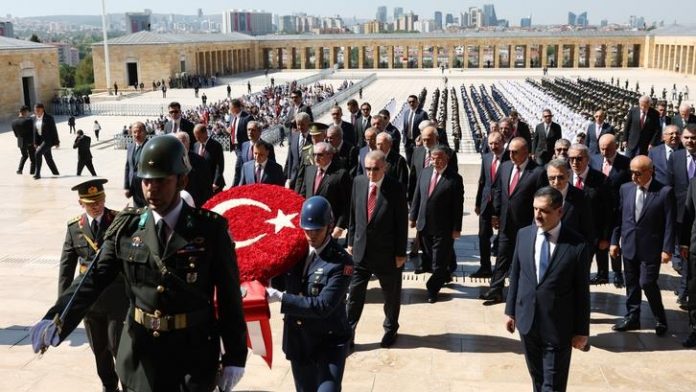 On the 100th anniversary of the country’s Victory Day, the Turkish president and key officials paid a visit to Anitkabir, the mausoleum of Mustafa Kemal Ataturk, the founder of the Republic of Türkiye.

President Recep Tayyip Erdogan, prominent government and military officials, and opposition leaders gathered at Anitkabir to lay a wreath. The Turkish National Anthem was played after a minute of silence.

“Dear Ataturk, on the 100th anniversary of the Great Victory, one of the most significant turning points in our glorious history, we commemorate with mercy your comrades-in-arms, distinguished members of the Grand National Assembly, and our saintly martyrs,” Erdogan wrote in the Anitkabir memorial book.

Erdogan committed to continue advancing the Republic of Türkiye in line with the established goals and to improve it in all areas, particularly the economy, defence, and diplomacy.

Türkiye, which has overcome the worldwide epidemic with zeal, also successfully controls disputes in its region and makes diplomatic measures for the restoration of peace and stability that are lauded by the entire world, he noted.

He emphasised that neither the machinations of the “oppressors” nor the actions of “bloody terrorist organisations” will be able to stop the development of a stronger, rising Türkiye, which is also the desire of the oppressed.

Erdogan then went to the Turkish State Cemetery in Ankara. “None of the internal or external ills will be able to prevent Turkey from rising, strengthening, and taking its rightful place in the global system,” he stated.

Mevlut Cavusoglu, Foreign Minister, observed Victory Day. “The fire of liberty that blazed 100 years ago will never die.” The Turkish Republic will hold solid forever!” Cavusoglu stated this on Twitter.

“Today marks the centennial of Turkish independence. “We join our Turkish allies across NATO and beyond in commemorating their Victory and Turkish Armed Forces Day,” said NATO Allied Land Command.

After the Ottoman Empire was defeated at the end of World War I, allied armies invaded Turkey (1914-1918).

The foreign occupation provoked Turkey’s War of Independence in 1919, during which Turkish soldiers commanded by Mustafa Kemal Ataturk drove the invaders out of Anatolia.

Turkish forces fought the Battle of Dumlupinar (considered part of the Greco-Turkish War) in Türkiye’s western Kutahya province from August 26 to August 30, 1922, where Greek forces were decisively defeated.

By the end of 1922, all foreign forces had left the territory that would one year later form the nascent Republic of Türkiye.