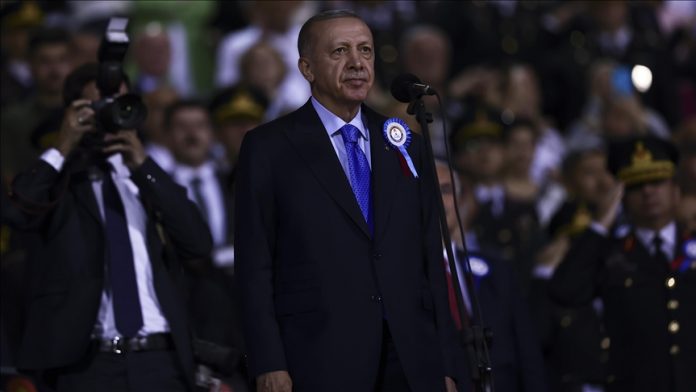 President Recep Tayyip Erdogan stated on Monday that Turkey has saved the lives of irregular migrants who had been unjustly driven back by Greece.

“Through the efforts of our Coast Guard, we were able to prevent casualties in the Aegean.” “In the previous two years, we have saved the lives of 41,000 individuals who were left to perish by Greece,” Erdogan stated during a graduation ceremony for the Gendarmerie and Coast Guard Academy in Ankara.

Erdogan stated that the Turkish Coast Guard has apprehended 245,000 irregular migrants, adding that the gendarmerie is continuing its fight against irregular migration and human traffickers.

“If someone continues to criticise our defence industry breakthroughs despite Greece’s military buildup, it shows they have lost strategic vision,” he continued.

Turkey has been a major transit point for asylum seekers attempting to enter Europe to begin new lives, particularly those fleeing war and persecution.

Erdogan stated that Ankara has no animosity for anyone or any country, adding, “On the contrary, we wish to develop the best, most advanced, and most sincere connection with every country and society.”

He also stated that Turkey intends to form a “belt of peace and collaboration” around itself, beginning with its immediate neighbours.

The president chastised people who criticise Turkey’s counter-terrorism operations in northern Syria and northern Iraq while remaining silent when “other countries come from 10,000 kilometres distant and intervene in Syria, Iraq, and Libya.”

Erdogan stated that if the countries continue to provide ammunition, trucks, and equipment to terrorist groups, Turkey will respond up to 30 kilometres beyond its boundaries, adding, “…if they are concerned by this, sorry, they will be disturbed, and we will continue on our path.”

“We have expanded Türkiye’s operational depth from Syria to Iraq.” “We are striking the terrorist group hardest in the areas where they feel safest,” Erdogan stated.