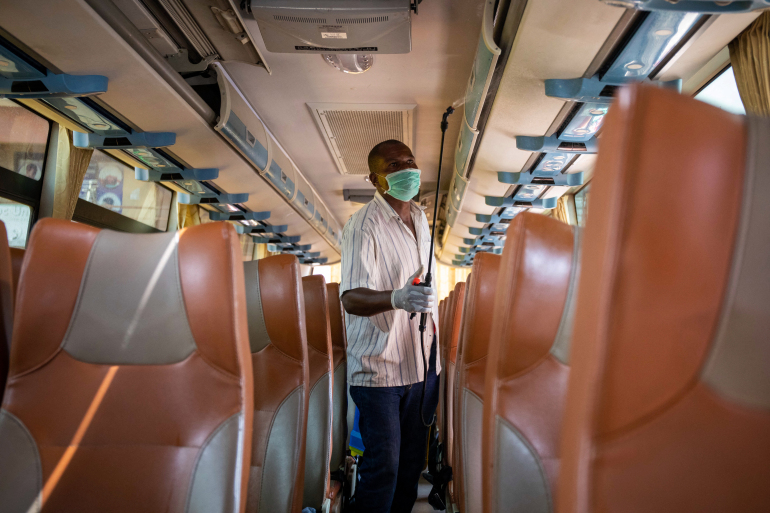 Uganda is among some African countries seeing a dramatic rise in the number of infections amid a vaccine shortage.

Last year, Uganda took drastic measures to restrict movements when it had only a handful of cases [Badru Katumba/AFP]

Uganda is tightening its COVID lockdown measures to try and stem a surge in infections in the East African country that is seeing an array of variants.

The measures, announced late on Friday by President Yoweri Museveni, include a ban on private and public transportation within and across districts, including in the capital, Kampala.

Only vehicles carrying cargo and those transporting the sick or essential workers are permitted to operate.

“All passenger vehicles are frozen,” Museveni said in a televised address, saying the movement was “the cornerstone” of the flare-up of recent infections.

The normally crowded shops in downtown Kampala have also been ordered shut. A continuing nighttime curfew will stay in place. The new measures will last 42 days.

Uganda is among some African countries seeing a dramatic rise in the number of infections amid a vaccine shortage.

It has confirmed a total of 68,779 infections, including 584 deaths. The actual totals are believed to be much higher. Only a few thousand samples are tested daily.

Last year, Uganda took drastic measures to restrict movements when it had only a handful of coronavirus cases. It imposed one of the earliest lockdowns and closures on the continent. The landlocked country gradually eased those restrictions as the number of COVID-19 cases dropped.

However, severe infections have soared in recent weeks and overwhelmed the fragile health system.

Doctors told AFP news agency that oxygen and other essential medical supplies have run low as daily cases have increased in the past three weeks from fewer than 100 to more than 1,700.

This is despite tightened restrictions announced last week including the closure of schools, bars and most gatherings.

“The hospitals are full,” Museveni warned, before adding that “the rapid surge in the intensity of the pandemic appears unprecedented, but still manageable” by introducing restrictions similar to those employed at the beginning of the pandemic.

Africa’s 1.3 billion people account for 18 percent of the world’s population, but the continent has received only two percent of all vaccine doses administered globally.