Ukraine’s president has called for a ban on Russian ships entering international ports. 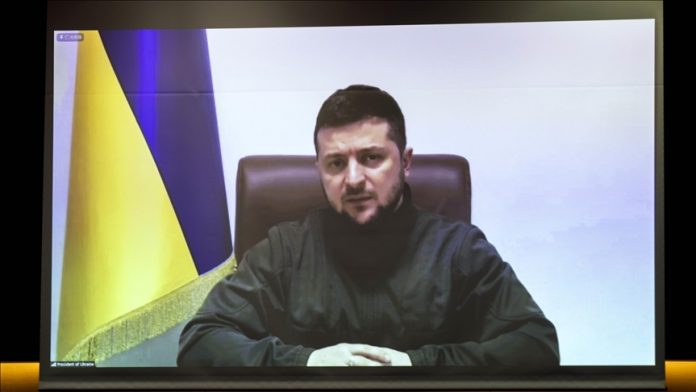 On Thursday, Ukraine’s president called for a ban on Russian ships entering international ports, as well as further penalties against Moscow.

“We need more sanctions against Russia, tough ones, until they cease blackmailing other countries with nuclear weapons.” “And they must pay the heaviest price for blocking the sea,” Volodymyr Zelenskyy said in a video speech to Australia’s federal parliament.

“No Russian ships should be allowed to dock in foreign ports.” Purchasing oil entails paying for the erosion of global security, according to Zelenskyy.

“Any Russian corporate activity, any money spent on the ruin of the people must be stopped.” No single dollar should be used to undermine global security, and we must put an end to any Russian plans to bypass the sanctions.”

He underlined that if the world had punished Russia in 2014 for its illegal annexation of Ukraine’s Crimean peninsula, “there wouldn’t be any of this terror of invasion in Ukraine in 2022.”

The president noted that Australia has a “really good” armed vehicle, the Bushmaster, and added that Ukraine would be “very thankful” if Australia could contribute those vehicles, as well as some other pieces of equipment that may bolster the country’s military posture.

On the other hand “”Russia didn’t destroy our dream, they simply burned down a plane,” Zelenskyy said of the “Dream” plane, the world’s largest plane that Russian forces destroyed. It’s a piece of hardware. This isn’t our liberty. Our vision is unstoppable.”

He also requested foreign assistance in the restoration of Ukraine.

“We ask significant countries and the world’s greatest professionals to join the initiative of Ukraine’s restoration to take a city or a sector under your stewardship that requires restoration.”

The Russia-Ukraine war, which started on Feb. 24, has been met with international outrage, with the EU, US and the UK, among others, implementing tough financial sanctions on Moscow.

At least 1,189 civilians have been killed in Ukraine and 1,901 injured, according to estimates by the UN, which cautioned that the true figure is likely far higher.

More than 4 million Ukrainians have also fled to several European countries, with millions more displaced inside the country, according to the UN refugee agency.