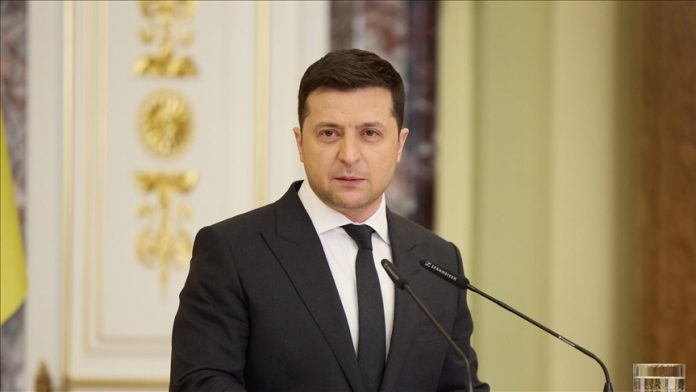 Ukraine’s president on Saturday called on the West to make public its prospective sanctions on Russia as a way to deter possible invasion as well as to announce a “clear” timeframe for his country’s NATO membership.

Speaking at the Munich Security Conference in Germany, Volodymyr Zelensky said it would be a “powerful step” to make a list of sanctions public, letting Moscow know of the consequences should it dare to step into an armed conflict with his country.

“We do not need sanctions after bombardment happens,” said Zelensky.

“An effective, preventive sanctions package is what we need to restrain the aggression,” he said. “But instead, we have silence.”

“While this silence persists, there will be no silence east of Ukraine, east of Europe, and the whole world,” he added.

Zelensky also said that a clear timeframe for Ukraine’s NATO membership should be set, adding that the alliance had its door open but that “no strangers” had so far been allowed in.

“If not all members of the alliance want us there, be honest. We need open answers,” he said.

Russia has made Ukraine’s possible NATO membership a key bone of contention in its positioning troops around Ukraine, though denying it has any plans to invade.

The Ukrainian president was also critical of statements suggesting that Russia could invade within days, saying they harm the economy and stability in his country, leaving it more vulnerable to aggression.

Top US officials including President Joe Biden have repeatedly said in recent days that an invasion is very likely imminent.

While speaking to CNN’s Christiane Amanpour, Zelensky asked for a new headset, implying there was a cyber-attack and saying: “You see, Russia is not here but they are here.”

Ukraine and its allies on Friday accused Russia of carrying out a cyber-attack on the Defense Ministry as well as a number of banks.

Turkey and others urged to help with ‘security guarantees’

Zelensky also called for a summit of countries of the UN Security Council, with the participation of Europe, Germany, and Turkey, in the coming weeks to “resolve security challenges of Europe and come up with new effective security guarantees for Ukraine.”

‎Turkey‎ has repeatedly shown its willingness to mediate between Ukraine and Russia to resolve the conflict via diplomatic means, with President Recep Tayyip Erdogan saying a trilateral meeting could be held in Istanbul with the participation of leaders of both countries.

Moscow, according to Ukrainian officials, recently amassed more than 100,000 troops near Ukrainian borders, prompting fears that the Kremlin could be planning a military offensive against its neighbor.

Russia has denied that it is preparing to invade and instead accused Western countries of undermining its security through NATO’s expansion towards its borders.

Russia also issued a list of security demands to the West, including a rollback of troop deployments from some ex-Soviet states and guarantees that some of those states would not join NATO.