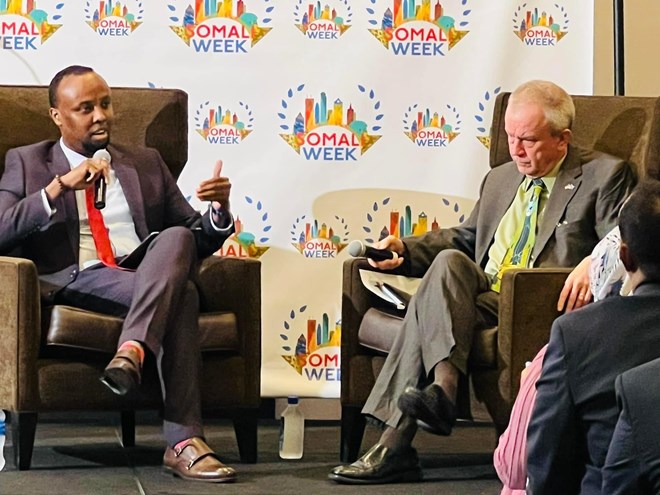 The US Ambassador to Somalia, Larry Andre, reasserted that the US maintains a single policy on Somalia and recognizes the border established during independence.

The Ambassador made these comments at an event in Minneapolis on Friday as part of a week-long festival celebrating Somali independence.

“Our policy is the same for the last 62  years, which is historic Somalia, in its historic borders ever since former British Somaliland opted to join the former Italian Somaliland and form the country.”

Ambassador Andre said that recognition of independence status talks should be determined exclusively by Somalia and Somaliland.

He added that the US policy would change its One Somalia policy if both parties could agree to a status change.

Close to 100 primarily Somali-Americans attended the Q&A-style event. It included short speeches from high-profile leaders in the community, including US Representative Ilhan Omar, State Representatives Hodan Hassan, Mohamed Noor and  Aisha Gome, and community and business leaders from the Twin Cities area.

The Ambassadors said it was an “exciting” time in Somalia but recognized that the most recent protracted electoral campaign was “disappointing.”

“You can see Somalia’s revival taking root. It’s two steps forward, one step back, but that’s human behaviour everywhere. We’re not going to have consistent progress.”

The event’s theme was how the Somali diaspora could support peace, stability and democracy in Somalia.

Ambassador Andre said that the Somali diaspora has become successful in their adopted countries worldwide.

“When you look at ethnic-Somali communities around the world, they tend to be prosperous because of the incredible work ethic, high capability and drive.”

The event was one of 22 events being held in the Twin Cities area this week to commemorate the 62nd anniversary of Somalia’s independence.