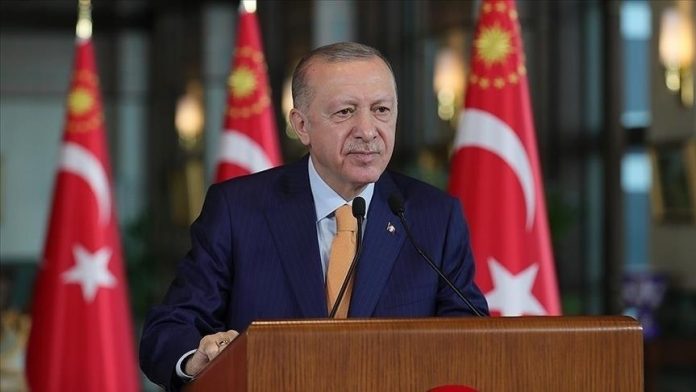 “Almost all of the leaders I met thanked us specifically for our role in reducing tensions during the Russia-Ukraine war. ‘We really appreciate and congratulate you on your role here,’ they said “Recep Tayyip Erdogan told reporters on the presidential plane en route from Samarkand, Uzbekistan, to New York on Friday.

Erdogan was invited to the SCO summit as a special guest by Uzbek President Shavkat Mirziyoyev.

For the first time since gaining dialogue partner status in the organisation in 2012, Turkey participated at the presidential level.

Erdogan stated that Turkey has pursued a balanced policy toward Russia and Ukraine since the beginning of the conflict in February.

“Of course, the grain corridor issue is the most important,” he said, adding that he discussed it with Russian President Vladimir Putin on the sidelines of the summit.

Erdogan stated that they agreed that the grain corridor should benefit the least developed countries rather than the developed ones.

On July 22, Turkey, the United Nations, Russia, and Ukraine signed an agreement in Istanbul to resume grain exports from three Ukrainian Black Sea ports that had been halted following the outbreak of the Russia-Ukraine war.

Previously, Erdogan echoed Putin, claiming that Ukrainian grain is exported to wealthy countries rather than impoverished ones.

“I hope that in the next process, we will make this corridor work in the best possible way,” Erdogan said.

When asked about Russia’s fertiliser export restrictions, Erdogan said Turkey is in talks with relevant countries about all kinds of products (grain or fertiliser) coming from both Russia and Ukraine.

“So far, no serious falsity has emerged as a result of our steps taken through mutual negotiation and consultation. We agreed during our meeting with Putin that this process should be continued with the same caution “He continued.

“Since its inception, the Shanghai Cooperation Organization has made significant strides in the fields of security, economy, and trade, and it has continued to grow within this framework. The Asian continent’s decisive role in the global economy is already clear “Erdogan stated this.

Erdogan stated that after participating in this year’s SCO summit as a dialogue partner, Turkey may take a further step in the 2023 summit in India.

The president stated that Turkey is committed to expanding bilateral and multilateral cooperation with continental countries.

Erdogan commented on the widespread media coverage of his image while speaking with leaders on the sidelines of the summit: “(Azerbaijani President Ilham) Aliyev left that seat to me, and he took the seat next to me.” Because the majority of them spoke Russian, the translator was also translating what we said into Russian.

“Of course, they all thoroughly enjoyed our conversation there.” It was a happy time.”

Azerbaijan and Armenia have recently clashed.

Regarding the recent clashes between Azerbaijani and Armenian troops earlier this week, Erdogan stressed the importance of Armenia abandoning “provocations” against Azerbaijan and focusing on peace and cooperation in accordance with previous commitments.

“Our wish is to successfully complete the normalisation processes underway in our region and to permanently ensure regional peace and stability,” he added.

Turkey reaffirmed its support for Azerbaijan, urging Armenia to stick to the agreement that ended the armed conflict in 2020.

Erdogan stated that during their discussions with Putin, they reiterated their commitment to moving forward with the Akkuyu Nuclear Power Plant, which is currently under construction in Turkey’s southern Mersin province.

“We hope to complete and inaugurate the first unit in 2023,” he added.